This was my second article published in the “Subject Genius” section of TES.com, the Times Educational Supplement website.

You can read the article on TES.com or it is reproduced with permission below the image. 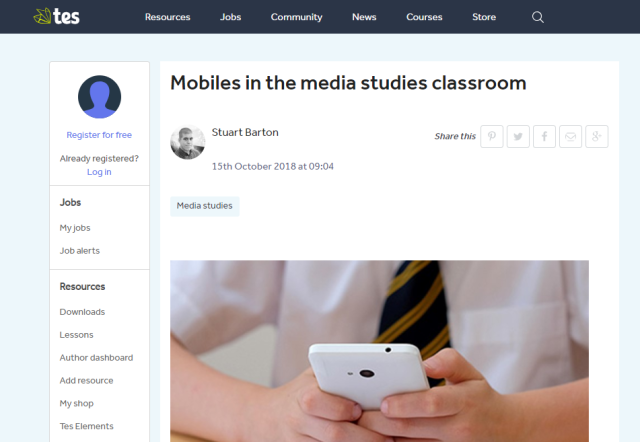 The use of mobile devices in schools is a divisive and controversial topic, but could they be beneficial in the media studies classroom?

In the 10 years that I have been teaching media studies, I have seen an incredible change in the content that I am teaching. One of the things that I love about teaching my subject is that it is constantly changing and evolving, forcing me to actively update my subject knowledge. When I started teaching, I wasn’t that much older than my students, and was largely consuming similar media products to them. Almost a decade later, I feel increasingly detached from the “Generation Z” students in my classroom, who have no experience of the pre-internet media landscape. I have to go out of my way to research the media that they are consuming, and ensure that I don’t fill my lessons with out-of-date content and examples.

One of the most notable additions to the media curriculum has been not only the internet, but also mobile devices. The ability for consumers to access the web anywhere, at any time, rather than being tethered to their home computer, has been a revelation. It has had a monumental impact, not only on consumers, but also on media institutions. Web-based content is now tailored specifically for web-based devices, and a whole new set of methods and strategies has been created to allow institutions to reach and interact with their audience. The way we interact with the media has changed, but one thing that largely hasn’t changed is the way mobile devices are used in schools. I occasionally see footage on the news of students in utopian classrooms, with a tablet computer each, but in my experience this is far from reality. In the three schools I have worked in, the mobile devices policies have been draconian, allowing no use of mobile devices by students at all on the school site.

I am not generally an exponent of mobile devices in the classroom. I don’t believe that they would necessarily raise student engagement or standards, and there are numerous studies, including one by the London School of Economics (2015), that show a noticeable improvement in attainment in schools with a complete mobile phone ban (not even allowed switched off in bags). Where I do think mobile devices could be used beneficially, however, is in the media studies classroom. So many aspects of the GCSE and A-level curricula are now incorporating online media, particularly relating to marketing and audience engagement. Unfortunately, it is often difficult to teach this as a real-world scenario in school, as access to many social networks is restricted in schools. Using their mobile devices to access social networks would circumvent these problems, and also allow pupils to see how the content that they are producing looks on a mobile device, as opposed to a desktop computer, which is more true-to-life.

The other great untapped resource that mobile devices represent is that almost every student in your classroom will have a device in their pocket, capable of capturing high-quality still images and video. This could be extremely helpful for departments in increasingly cash-strapped schools. When teaching a foundation topic, such as shot sizes, camera angles and camera movements, you could get every student to demonstrate their understanding by producing practical examples of what they have learned, using both still images and video. This could then be uploaded to the student’s online subject blog, for annotation. This would help to engage all students, and ensure that no one gets left out, as often happens when they are working in small groups with one camera between them. There is also no reason why these devices could not be used to capture images and footage for practical controlled assessments. The quality of mobile phones’ built-in cameras has increased exponentially, and there are dozens of international film festivals dedicated specifically to films shot on mobile devices. Films shot on phones have gained more exposure in recent years, thanks in part to films such as Tangerine, a multi-award winning feature-length film, shot entirely on an iPhone 5S, which premiered at the prestigious Sundance Film Festival in 2015. Some smartphones even come with simple video-editing software, either built-in or available to download as free apps. This would empower students to take the production and post-production processes into their own hands, outside of the classroom, without the need for expensive equipment and software. If teachers began to incorporate mobile devices into their practical media teaching more regularly, the positive associations that students have for their devices may transfer somewhat to the lessons and subject itself. We could turn students’ largely negative mobile-obsession into a positive, and get more students improving their skills by producing their own media products outside of lessons, in addition to their controlled assessments.

Allowing students to use mobile devices in the classroom, or on the school site, does have the potential to cause problems, and would not be appropriate for all students or groups. However, as with behaviour management in general, in order to be successful, it simply requires clear expectations, rules and sanctions, applied in a consistent manner. I would suggest some of the following:

I realise that this is an extremely controversial topic within education, and I certainly don’t claim to have all of the answers. However, I feel that this is a topic that is worthy of rigorous debate among teachers of media studies. It may also help to alleviate the pressures associated with delivering specifications that require compulsory original images or footage taken by students for non-exam assessments, with limited amounts of ageing camera and computer equipment.

Stuart Barton is a teacher of Media Studies, in the West Midlands. Stuart writes both fiction and non-fiction, for print and online. He has been published in print with The Guardian, Irish Daily Star, and The Teacher, on radio with BBC Radio 4 Extra, and online with websites such as GreatLittlePlace.com.
View all posts by Stuart Barton →
This entry was posted in Education, Non-Fiction, Published Online, Published Writing, Technology and tagged Media Studies, Mobile Phones, Mobiles, Subject Genius, TES, Times Educational Supplement. Bookmark the permalink.