“An Englishman in Croke Park” – Amen

This feature was published in the May 2012 issue of AMEN magazine, a monthly men’s glossy supplement of the Irish Daily Star. It chronicles my introduction to, and increasing interest in Gaelic Football. The full original text is reproduced below, along with an image of the the edited version in print, which you can click to enlarge.

As an Englishman, I did not grow up with Gaelic games. My introduction to all things GAA began nearly three years ago, courtesy of my Dublin-born girlfriend. The first night we met, Gaelic football, specifically the Dubs, was one of the main topics of conversation. Sport has played a significant part in our relationship ever since, as I have helped her to understand the finer points of rugby union, so she has immersed me in the rich culture of Gaelic football. 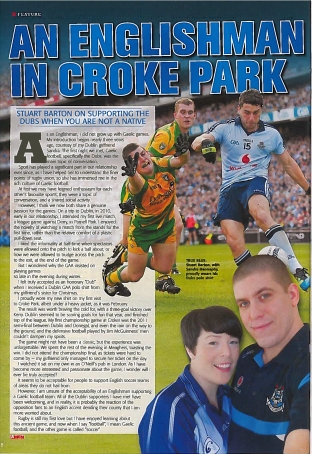 At first we may have feigned enthusiasm for each other’s favourite sports; they were a topic of conversation, and a shared social activity. However, I think we now both share a genuine passion for the games.

On a trip to Dublin, in 2010, early in our relationship, I attended my first live match, a league game against Derry, in Parnell Park.

I enjoyed the novelty of watching a match from the stands for the first time, rather than the relative comfort of a plastic pull-down seat. I liked the informality at half time when spectators were allowed onto the pitch to kick a ball about, or how we were allowed to trudge across the pitch to the exit, at the end of the game, rather than being kept off by a fluorescent yellow wall of stewards. I attempted to hide my apprehension at the gangs of hooded teenagers lurking around, brandishing hurls. Finally I wondered why the GAA insisted on playing games so late in the evening during winter.

I felt truly accepted as an honorary “Dub” when I received a Dublin GAA polo shirt from my girlfriend’s sister for Christmas. I proudly wore my new shirt on my first visit to Croke Park, albeit under a heavy jacket, as it was February. The result was well worth braving the cold for, with a three-goal victory over Kerry. Dublin seemed to be scoring goals for fun that year, and finished top of the league.

My first championship game at Croker was the 2011 semi-final between Dublin and Donegal, and even the rain on the way to the ground, and the un-entertaining defensive football played by Jim McGuinness’ men couldn’t dampen my spirits. The game might not have been a classic, but the experience was unforgettable. We spent the rest of the evening in Meaghers, toasting the win, serenaded by endless renditions of “We’re going to win the Sam!”

I did not attend the championship final, as tickets were extremely hard to come by, my girlfriend only managed to secure her match ticket on the day of the game. I thought it was appalling that loyal Dublin supporters who had waited sixteen years for their team to reach an All-Ireland final, struggled to get tickets, and even if I could have got a ticket, I wasn’t going to deny a die-hard Dubs fan a seat. My girlfriend watched the game sat between uninterested supporters from the North, and I watched it sat on my own in an O’Neill’s pub in London. I wished I could have been in Dublin that day.

My short time as an honorary Dublin supporter has been a relatively successful era for the team, and I have yet to attend a match that the Dubs have lost. Perhaps I am a lucky charm? Though as I have become more interested and passionate about the game, I find myself in an odd situation; will I ever be truly accepted? It seems to be acceptable for people to support English soccer teams from areas that they are not from, or do not have family connections to. In fact I was surprised to find that most Irishmen I encountered supported English soccer teams, and I have yet to encounter a Shamrock Rovers or Bohemians fan. However, I am unsure of the acceptability of an Englishman supporting a Gaelic football team, as Irish people usually support the county that they were born and raised in, or have family connections to, rather than arbitrarily picking a team. However, all of the Dublin supporters I have met have been extremely welcoming towards me, and in reality, it is probably the reaction of the opposition fans to an English accent deriding their county that I am more worried about.

Rugby is still my first love – I thoroughly enjoyed England’s demolition of Ireland in the 2012 Six Nations – but I have enjoyed learning about this ancient and exciting game, and now when I say “football”, I mean Gaelic football, and the other game is called “soccer”.

Stuart Barton is a teacher of Media Studies, in the West Midlands. Stuart writes both fiction and non-fiction, for print and online. He has been published in print with The Guardian, Irish Daily Star, and The Teacher, on radio with BBC Radio 4 Extra, and online with websites such as GreatLittlePlace.com.
View all posts by Stuart Barton →
This entry was posted in Non-Fiction, Published in Print, Published Non-Fiction, Published Writing, Sport and tagged Amen, Dublin, GAA, Gaelic Football, Irish Daily Star, Published in Print, Published Writing, Sport, The Dubs. Bookmark the permalink.

1 Response to “An Englishman in Croke Park” – Amen